Robert Browning had once said, ‘Open my heart and you will see, graved inside of it, Italy’ and truer words have hence not been spoken for me. The husband and I traveled to Italy in August 2014, traversing through 7 cities in 12 days (!!); and somehow among all of that, I fell in love with Florence, or Firenze as the locals call it.

Nestled in the heart of Tuscany, and marked historically as the epicentre of Renaissance, Florence offers a great sense of environment, preservation and tourism. With most of the streets surrounding the attractions, down to the River Arno converted to pedestrian only zones since 2011, the city offers low pollution, clean streets and thus, makes for happier tourists. Surely you will find the odd bicycles and a few horses, but they just add to the charm. What it also means is you can enjoy even with tiny tots and children. No wonder many call it the Walking City of Italy!

We reached Florence around noon, travelling from Naples by the Italian Frecciarossa train. It was a warm, sunny day and our hotel was a short walk from the station; the roads quite amenable to drag our wheelie bags. The fact that the city is so beautiful made the walk all the more bearable. Oh! And our hotel’s terrace offered a stunning view of the Duomo – but more on that later. A quick check-in later, we were out on the cobbled streets to explore the quaint yet warm environs of the city. 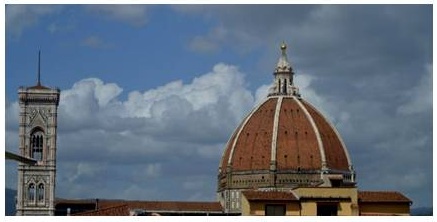 I KNOW it’s quite weird and somewhat sacrilegious for us to be in Florence and go full-on consumerist instead of art aficionados, but our first stop was Mercato Centrale – and I strongly suggest you do so too! Florence offers something new and brilliant at every turn – something to do with art, shopping or food – and we were hungry for a picnic lunch- so, our choice was pretty obvious… but girl, was I ready for it? This was hands down the coolest, most colorful and interesting market we’d ever been in. And the people? So friendly, ready for a chat and oh-so-remarkably-helpful.

One of them was a Professor at a local art college and after a short chat, sold us wine produced at his own vineyard- full of flavours and with such a gorgeous bouquet. We bought a couple of bottles, packed one for our journey back home, and had another along with some fresh bread, cheese, charcuterie and fruits, in the lesser known and hence, somewhat calmer Piazza Santa Maria Maggiore. 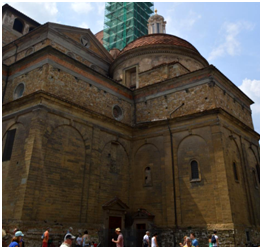 A lazy afternoon later, we walked back to the hotel to freshen up and head out of town to Pisa. We had our tickets for ascending the Tower booked online; so all we had to do was reach there on time- we spent the rest of Day 1 in Pisa and returned late to our hotel in Florence.

Click here to know how our day trip to Pisa went. 🙂

Our second day began early since we had a lot planned.  A hearty breakfast on the hotel’s sunny terrace while gorging on the marvelous views of the Duomo made us feel rather sluggish, but we somehow managed to get out and head for the Ufizzi Gallery as we had our tickets pre-booked. It’s always a rather good idea to do so to avoid crowds and the long queue, plus if you are anything like us, it helps you stick to some form of a schedule on a tightly planned day. Anyway, we walked past the Academia, making a promise to return here again someday at leisure and view Michelangelo’s David in full splendor. For this trip though, we decided to satiate ourselves with the two replicas in Florence. After a short walk around Piazza Santa Maria del Fiore that houses the remarkable Cathedral complex and the famous Duomo, we reached the Ufizzi Gallery late morning.

Ufizzi houses some of the most magnificent artworks across 45 well appointed rooms, including those from Titian, Botticelli, Raphael, Michelangelo and Giotto. Neither a full day nor a paragraph here could ever be enough to cover the Ufizzi. However, if you are short on time, my top 5 recommended masterpieces would be: Adoration of the Magi, Birth of Venus, La Primavera, Venus of Urbino and Caravaggio’s Medusa.

With a panoramic view of the River Arno and Ponte Vechhio, we left Ufizzi extremely humbled, overwhelmed (yes, the usually not-the-museum-kind husband too!) and famished. 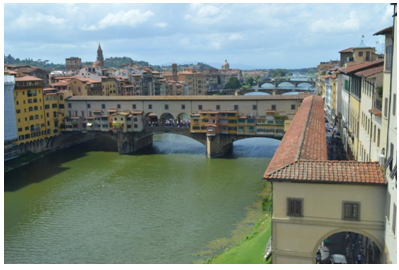 A pizza picked up from the first place we found (still amazing!) later, we had a rather late lunch in the Piazzele della Signoria, amidst throngs of mesmerizing sculptures in the Ufizzi courtyard (I could go on and on about them), the gorgeous Fontana del Nettuno and one of the Davids, with the Palazzo Vechhio as a backdrop, amazing street artists, other tourists, and a really scary clown!

We had heard so much about Eduardo near the Duomo for its gelatos that we had to go back there. I went shutter crazy while the husband queued for our treasures. Against his will, I decided to give the climb up the Bell Tower and Duomo a skip owing to the unending queues… I promised him some other magnificent views instead, and he was suitably placated. 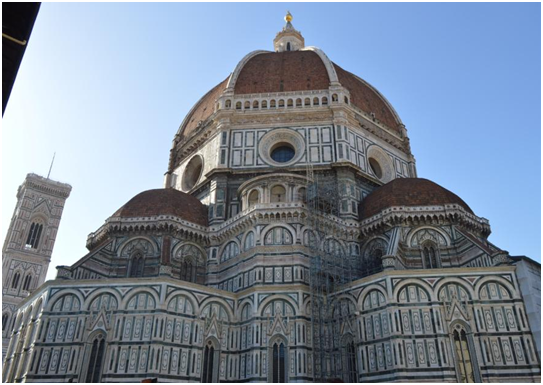 So, we crossed the Ponte Vechhio and its arrays of shops that once were butcheries, and now sell jewelry, artwork and souvenirs. The upper floor houses part of the secret Vasari Corridor, connecting Palazzo Pitti and Vechhio, both of which had to be relegated to the bucket list along with Boboli Gardens that would be our next trip to Dante’s first love, Firenze.

Crossing onto the other side, which immediately loses the entire crowd; we made a short hike to Galileo’s home, the birthplace of the Church’s wrath that was the Renaissance! I am sure the feeling we shared standing there in that moment is what the religious minded feel on a pilgrimage…

A journey isn’t memorable unless you get so enamored by it, you hardly realize you’re lost (trust me, I know)! We somehow made a complete detour and realised all too suddenly that we were walking towards the countryside instead of the magnificent views I had promised the husband. Anyhow, we made a 180* turn and walked past the beautiful San Minato Al Monte, perched up the highest point in Florence and offering some of the best views of the city, and finally reached Piazzale Michelangelo right after sunset!

A must do if you are in Florence – reach the Piazelle around sunset and admire the cityscape at the golden hour, twilight and as night sets in. Florence is magnificent at daytime, but you need to see it light up in the evening, when it transforms into a magical entity to truly appreciate the beauty of the city. 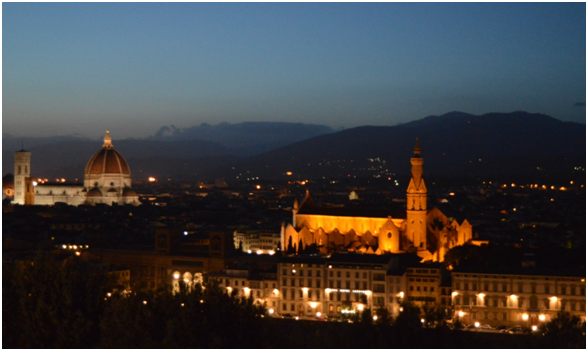 Also, we viewed our third David of the city! J 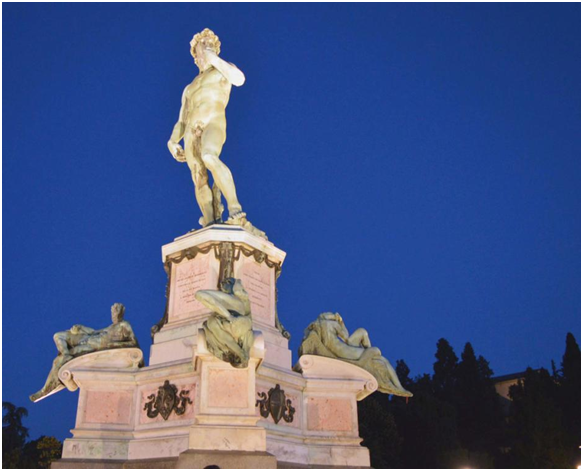 We walked downhill to the riverside promenade, hand in hand, and were pleasantly surprised by an open air concert in Italian and English… After spending a good amount of time there over a bottle of wine and some more Florentine grub, ‘we crossed a Ponte’ and made our way back to the hotel, planning our move to Venice the next day… completely in love with the city and once again, with each other on our first wedding anniversary!

Have you been to Florence yet? If so, do share your favourite moments spent there.. If you haven’t already, what are you waiting for? Pack your bags, book your tickets and off you go.. and do give me a shout when you’re back! 🙂

This site uses Akismet to reduce spam. Learn how your comment data is processed.